"Tensions surrounding North Korea have been rising recently and the South Korean economy may be affected by it," Finance Minister Yoo Il-ho said in a weekly staff meeting. "We need to monitor the movements of North Korea and their impact on the economy, and take action in a timely manner."

Geopolitical risks have increased on Korean Peninsula amid speculation that Pyongyang may conduct its sixth nuclear test or launch an intercontinental ballistic missile around its key anniversaries in April.

He said the government should make more efforts to prevent such downside pressure from spreading into the real economy, which seems to have entered an upside cycle on the back of more global trade.

"The economy has been doing better than expected as rising exports led to recovery in production and investment," said the top economic policymaker. "But we will not let our guard down given internal and external risks including North Korea and other trade issues."

There has been concerns of rising protectionism in certain countries that can directly impact Asia's fourth-largest economy. 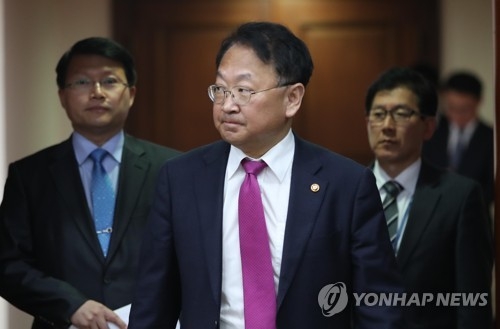