(ATTN: UPDATES throughout with additional remarks)

"North Korea will do well not to test his (Trump's) resolve or strength of the armed forces of the United States in this region," Pence said, noting the U.S. president's recent decision on military action in Syria and Afghanistan.

"We hope to achieve this objective (Pyongyang's denuclearization) through peaceful means, but all options are on the table," he added

On April 7, the U.S. struck a Syrian air base to punish the Bashar al-Assad regime for a suspected chemical attack. Less than a week later, it dropped a massive bomb on an Islamic State complex in Afghanistan.

Calling Pyongyang the region's "most dangerous and urgent threat," Pence denounced Pyongyang's failure to follow through on its denuclearization commitments.

"North Korea answered our overtures (for denuclearization) with willful deception, broken promises, and nuclear and missile tests," he said.

"The era of strategic patience is over," he added, referring to the former Obama administration's policy approach criticized for failing to prevent the North from furthering its nuclear program.

The vice president began his three-day visit to South Korea -- the first leg of his four-nation tour of the Asia-Pacific region -- on Sunday afternoon, hours after the reclusive state's botched attempt to launch yet another ballistic missile.

Warning against additional North Korean provocations, the No 2 man in the Trump administration reassured "we will be with you (South Korea) 100 percent" whatever happens in the presidential election here slated for May 9.

"We will defeat any attack and we will meet any use of conventional or nuclear weapons with an overwhelming and effective response," he said.

He also reaffirmed that the allies will continue to delay a U.S. missile defense system, stressing the "defensive measure" is "called for by and called for the alliance." 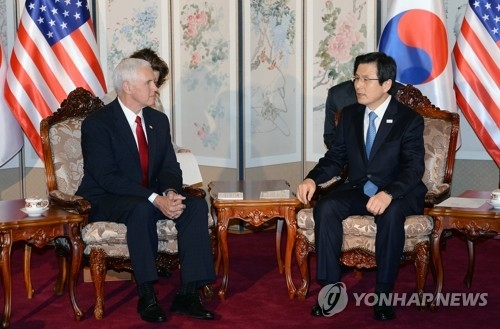