The message celebrating the 71st anniversary of Syria's independence from France, carried by the state-run Korean Central News Agency, said Kim took the occasion to lambaste the U.S. for its "reckless act of invasion" on Syria.

In the message, Kim also expressed "strong support and solidarity to the achievement of justice held by the Syrian government and people."

On April 7, the U.S. mounted a missile strike in Syria in response to the alleged use of chemical weapons by the Assad regime. The strike on an airfield held by Assad's regime has drawn flak from North Korea, but Monday's message for Assad marked the first time that Kim personally criticized the U.S. for it.

North Korea and Syria have reaffirmed efforts to step up relations in their recent exchanges of congratulatory messages on key anniversaries as the recentstrike alarmed both countries.

Assad sent two congratulatory messages to North Korean leader Kim Jong-un last week for the 105th birthday of national founder Kim Il-sung and the fifth anniversary of the current leader's election to top posts. The Syrian messages followed a similar telegram from Kim Jong-un sent to the Syrian president last Thursday for the 70th anniversary of the founding of the ruling Ba'ath Party there. 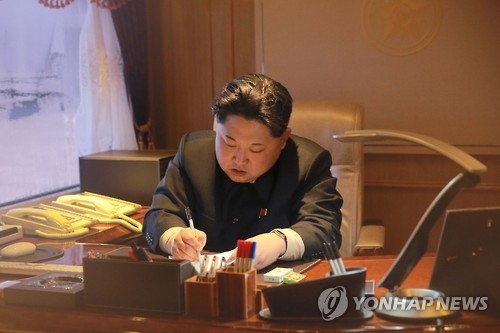