SEJONG, April 18 (Yonhap) -- More than half of young South Koreans do not think they must get married, a report showed Tuesday, amid a decadeslong trend of late marriage and low birthrates.

According to the report compiled by Statistics Korea, 51.4 percent of those aged between 13 and 24 answered that marriage is not mandatory in 2016, up from 44.4 percent tallied two years ago. The data is based on the agency's earlier survey held last year on 38,600 people over 13 years old.

The percentage has been on a rise for years, with the figure having stood at 36.7 percent in 2010.

Those who are in favor of marriage last year accounted for 38.8 percent of all people polled, down from 48.1 percent in 2014.

Moreover, 61.7 percent of South Korean youths said that a couple can live together without formally tying the knot, although only 34.5 percent of their parents had the same view.

As more and more women work and pursue their careers, people are getting married and having children at older ages, or giving up on finding a spouse and having babies.

The country's fertility rate, or the average number of babies that a woman is projected to have during her lifetime, has hovered around 1.2 since it dropped to a record low of 1.08 in 2005.

The report also showed that the number of young people in the age group of 9-24 reached 9.25 million in 2017, accounting for a modest 18 percent of the country's total population of 51.45 million.

The youth population will keep decreasing further due to the low birthrate, while the entire population is forecast to contract from 2032 onward. 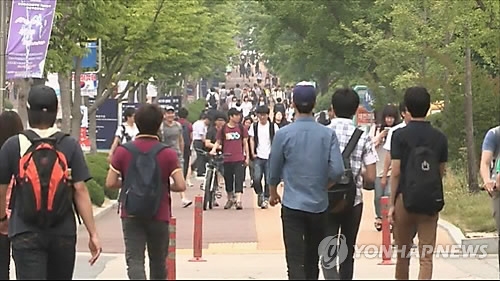 More than half of young S. Koreans think marriage unnecessary

More than half of young S. Koreans think marriage unnecessary