SEOUL, April 17 (Yonhap) -- A tank was spotted leaving North Korea's massive military parade while it was in progress, in a loss of face for Pyongyang as it staged a show of military prowess amid heightened tensions over its nuclear and missile programs. 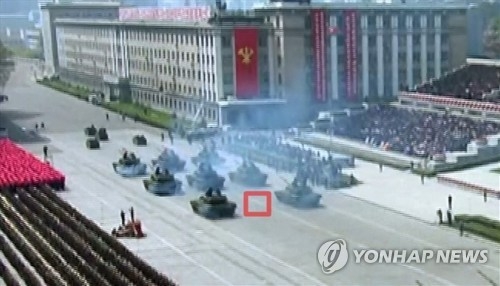 North Korea did not report the cause of the problem.

The parade comes amid tension over Pyongyang's nuclear and missile programs.

On Monday, U.S. Vice President Mike Pence warned North Korea against testing America's mettle with its saber-rattling, saying Washington will defeat any use of military force with an "overwhelming and effective" response.

He also warned that "the era of strategic patience is over" during a joint news conference with South Korea's Acting President and Prime Minister Hwang Kyo-ahn.