SEOUL, April 18 (Yonhap) -- The South Korean men's hockey team on Tuesday departed for Ukraine, the site of the upcoming world championship, with an eye on a promotion to the sport's highest division next year.

It's also a key test tournament for South Korea ahead of its Olympic debut on home ice next year at the PyeongChang Winter Games. South Korea earned a spot as the host, and will face world No. 1 Canada, along with the Czech Republic and Switzerland. 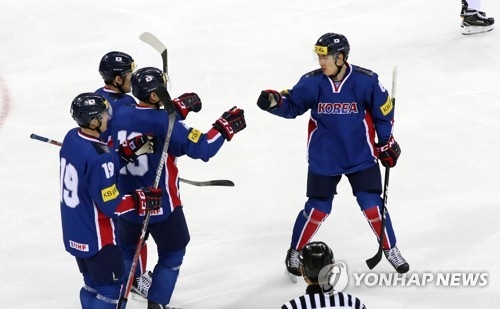 Kazakhstan and Hungary were relegated from the top division last year, while Austria has qualified for next year's PyeongChang Winter Olympics.

Joining Kazakhstan will be a Canadian-born forward Martin St. Pierre, a naturalized Kazakhstan citizen who has played for four different NHL clubs.

Paek's players have been training since last Thursday. The majority of the players competed in the Asia League Ice Hockey (ALIH) final for the South Korean team Anyang Halla, which defeated Sakhalin for its second straight title.

South Korea will send a handful of North American-born athletes -- No. 1 goalie Matt Dalton, defensemen Eric Regan and Bryan Young, and forwards Mike Testwuide and Michael Swift. All of them also played for South Korea at the Asian Winter Games two months ago.

The team had encouraging performances against world No. 2 Russia in friendly games last month, losing 4-3 and 5-2 despite missing some key pieces.