WASHINGTON/SEOUL, April 18 (Yonhap) -- A U.S. State Department official said Monday there is no hiccup in the ongoing deployment of a cutting-edge missile defense system in South Korea, dismissing concern about a political setback.

"There hasn't been any change, and there hasn't certainly been anything about the decision-making process that would indicate any change," Susan Thornton, acting assistant secretary of state for East Asian and Pacific affairs, told reporters in a telephone conference. "So we're on track as far as that goes for THAAD deployment."

THAAD is the acronym for Terminal High Altitude Area Defense. It's the most advanced U.S. missile shield composed of a state-of-the-art radar and interceptors to hit incoming missiles. 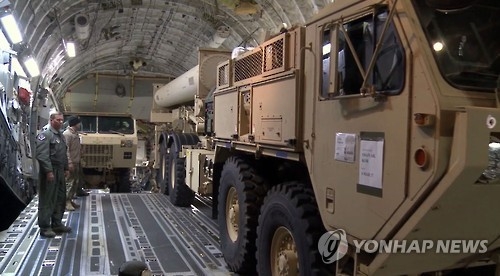 The allies agreed last year to install a THAAD system in the southeastern town of Seongju, saying it's a must to thwart North Korea's nuclear and missile threats. Some related components are already here.

There has been speculation that the U.S. may delay the deployment process until after South Korea's presidential elections on May 9.

South Koreans are split over the THAAD issue amid a strong backlash, especially from China.

The U.S. might have made some concessions over THAAD in a bid to draw cooperation in efforts to put "maximum pressure" on Pyongyang, they pointed out.

South Korea's foreign ministry, however, reaffirmed that there is no daylight between Seoul and Washington on the issue.

"South Korea and the U.S. have a completely common position with regard to the THAAD deployment," the ministry's spokesman Cho June-hyuck said.

He added they agree on the need for reinforcing their joint defense posture via the early installation and operation of the missile defense system.

On Monday, South Korea's defense ministry also reaffirmed that there is no change in the plan to position a THAAD unit in South Korea as early as possible.

The ministry has already secured a golf course in Seongju, North Gyeongsang Province, from Lotte Group in a land-swap agreement.

Seoul and Washington are in the final phase of talks on the grant of the site under the Status of Forces Agreement (SOFA), officials said.

The two sides will then carry out a joint environmental impact survey of the zone, a process likely to take weeks or months.

"It's virtually impossible to wrap up the deployment of the THAAD system before the presidential election," a defense official said.

If it presses ahead with another nuclear test, it "would draw a pretty significant international response," she said without elaborating.

She left the door open for negotiations with the communist nation.

"We are definitely not seeking conflict or regime change," she said. "But we are committed to defending our people and our allies should it be necessary."

North Korea stated that it won't budge at all.

"We'll be conducting more missile tests on a weekly, monthly and yearly basis," Vice Foreign Minister Han Song-Ryol said in an interview with the BBC, a British broadcaster.

"If the U.S. is reckless enough to use military means, it would mean from that very day, an all-out war."