Data by the Ministry of Land, Infrastructure and Transport were collected by counting cars passing through select sections on highways and major roads throughout the country. Results showed an average 14,525 cars using key roads on a given day.

The traffic volume jumped 17.4 percent over the past decade, according to the ministry's survey.

Passenger cars accounted for 72.1 percent of the traffic volume, followed by cargo vehicles at 25.1 percent. Buses counted for 2.7 percent.

On a monthly basis, traffic was heaviest in August, the peak vacation period. The volume, when compared with a 100 percent base, recorded 107.1 percent. May, a family month with a number of holidays, and September, the month of hometown visits for the harvest moon holiday, followed next at 104.2 percent. January was the least busy month on the roads with 87.3 percent. 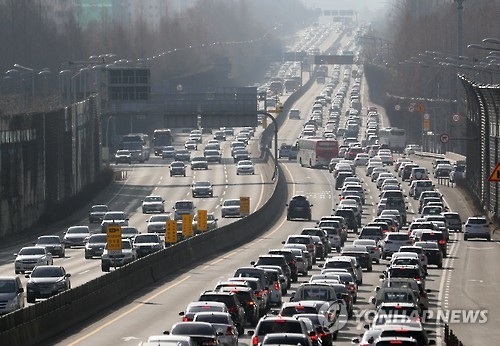