Eighty-seven listed firms affiliated with the top 10 business groups were surveyed by conglomerate tracker FnGuide, with additional information provided by the Data Analysis, Retrieval and Transfer system (DART) service under the Financial Supervisory Service. The results showed the companies had 629,517 employees as of the end of last year, 2.29 percent less than the previous year's 644,248.

There were 1.99 percent less male employees last year than the previous year, and 2.87 percent less female workers. The number of regular staff fell by 1.84 percent. The amount of contracted employees dropped 8.85 percent.

At Samsung Electronics, the workforce was down by 3,698 workers, or 3.82 percent. The biggest brunt was in the consumer electronics division, which lost 2,581 employees.

An industrywide slump in shipyards led to a 14.75 percent drop for Hyundai Heavy Industries, the biggest loss among all measured companies in the survey. 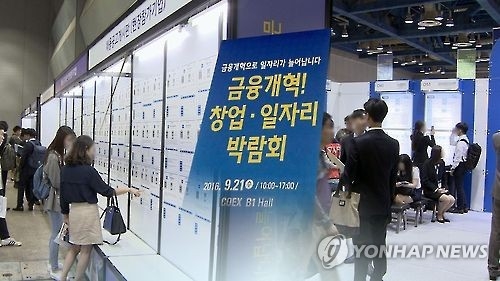 Other than Hyundai Heavy Industries, whose workforce was reduced the most last year, Samsung Group subsidiaries generally lost a large number of employees. Samsung Electronics' staff was down by 3,698, Samsung Heavy Industries by 2,077 and Samsung SDI by 1,969. Samsung C&T was also down by 1,831. Much of the reduction had to do with changes in the group's governance structure and business restructuring.

Hyundai Motor made the biggest gain in the workforce by adding 1,113 people. Mobile carrier LG Uplus was next with 753.
(END)