SEOUL, April 18 (Yonhap) -- The chief of Kumho Asiana Group, a logistics conglomerate, said Tuesday that he would not exercise his right to buy back a local tiremaking affiliate currently under creditors' control.

The state-run Korea Development Bank (KDB), the main creditor of Kumho Tire Co., said earlier that it will sell the country's No. 2 tiremaker to a Chinese firm unless Park Sam-koo, chairman of Kumho Asiana Group, exercises his right to buy back the company.

Park has urged the KDB to allow him to form a consortium for the potential takeover, but the KDB said Park is required to show his intention by Wednesday if he wants to take back the country's No. 2 tiremaker. The lender believes Park may face difficulties getting the necessary funding.

"I will not join in this unjustifiable and unfair sales process, and not exercise my buy back right," Park said in a statement. "I strongly urge that bidding for Kumho Tire sales should be reopened in a fair manner."

The business leader added that he would not take legal action against the creditors of Kumho Tire for denying his lawful right to buy back the former affiliate.

Kumho Asiana said earlier that the legal measures, including a court injunction against the proposed sale of Kumho Tire to a consortium led by a Chinese firm, may be reviewed.

The KDB-led creditors have said they will move forward with the sale of Kumho Tire to Chinese tiremaker Doublestar unless the chairman formally expresses his intent to regain control of the company. 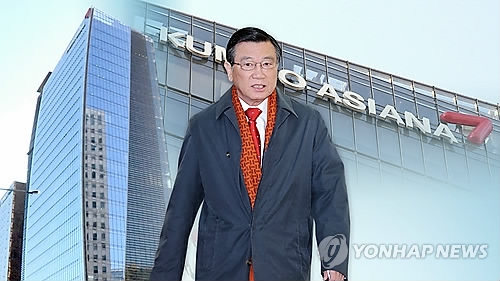 Kumho Asiana chief to not exercise buyback right for tiremaker

Kumho Asiana chief to not exercise buyback right for tiremaker