INCHEON, April 18 (Yonhap) -- Hundreds of North Korea's propaganda leaflets have been found in this western port city, police said Tuesday, in the latest propaganda campaign carried out by the reclusive country amid escalating tensions in the Korean Peninsula.

Police said about 800 leaflets were found near an apartment complex in Incheon, west of Seoul, on Monday at around 11:10 p.m. They carried messages celebrating the 105th birthday of Kim Il-sung, the late founder of the country and the grandfather of leader Kim Jong-un.

A resident from the apartment reported to police, saying a number of leaflets are falling from the sky, they said.

On Saturday, the North celebrated the birthday by holding a military parade, showing off what appears to be a new intercontinental ballistic missile.

Police said they have handed over the leaflets to the military for a more detailed examination. 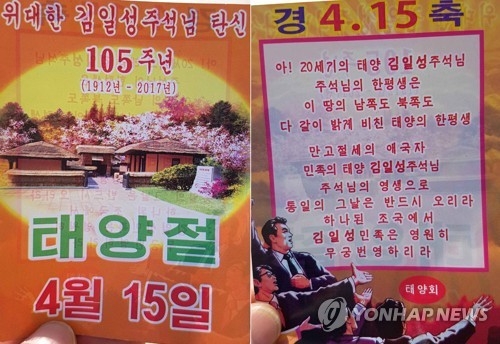