SEOUL, April 18 (Yonhap) -- Presidential candidate Ahn Cheol-soo pledged Tuesday to eradicate poverty among the growing number of senior citizens in the country if elected in the upcoming election.

The nominee of the center-left People's Party made the pledge during a meeting with representatives of the senior citizens welfare industry in the central city of Daejeon. 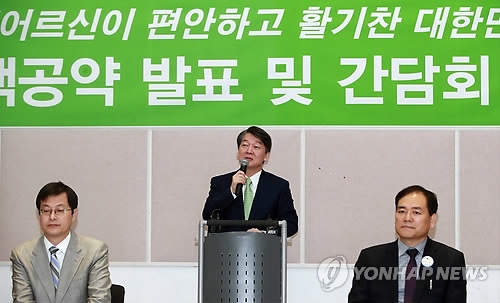 Ahn said the government must swiftly address issues facing the elderly population as their number will grow to 14 percent of the entire population by the end of the year. He also pointed to reports that the suicide and poverty rates among senior citizens are the highest among member nations of the Organization for Economic Cooperation and Development.

"(My vision) is a welfare system that guarantees the basic livelihoods of the people," he said. "In other words, it centers on first and foremost helping those in a blind spot, those who are suffering but neglected."

Ahn said he will place top priority on eliminating the poverty level among senior citizens by raising the basic pension for those in the lower 50 percent income bracket and scrap a system that disadvantages fee-paying subscribers of the national pension service.

Ahn vowed to reduce the senior citizens' burden by lowering their share of medical expenses from 20 percent to 10 percent and offering different levels of financial support to different income groups.

He also offered to build a support facility for patients with Alzheimer's in each city, county and district, and double state spending on relevant research and development.

As his third pledge, Ahn said he would create a system to help senior citizens aged 60 and above receive renewed training for jobs and increase the number of jobs available to them by 50,000 annually.

Ahn is widely seen as one of two likely candidates to win the May 9 presidential election, along with Moon Jae-in of the liberal Democratic Party.