The Korea Football Association (KFA) said Jung Hae-sung will be the top assistant to Stielike and will work with the Taeguk Warriors until the 2018 FIFA World Cup in Russia, should South Korea qualify for football's showpiece event.

Jung, 59, previously served on the national team bench at the 2002 and 2010 FIFA World Cups, working under Guus Hiddink and then Huh Jung-moo. South Korea reached the semifinals at the former and made it to the round of 16 in the latter.

Stielike has been in hot water for months following a string of mediocre matches in the final Asian qualifying round for the 2018 World Cup. In their two most recent matches, South Korea dropped to China 1-0 on the road and eked out a 1-0 win over Syria at home.

While angry fans here have called for Stielike's head, the KFA technical committee decided to stick with the German coach and offered instead to bolster his coaching staff with an experienced tactician.

"The KFA technical committee decided that Jung is the right person since he has abundant experience as a national team coach and achieved good results at major competitions," the KFA said in a statement. "The KFA reached a contract with Jung after earning consent from him and Stielike."

In the final World Cup qualification round, South Korea are in second place among six nations in Group A with 13 points from four wins, one draw and two losses, four points behind Iran and just one ahead of Uzbekistan. Only the top two nations will earn automatic World Cup berths, and the third-place team must go through a playoffs. South Korea have made the past eight World Cup finals.

The KFA said Jung will meet with the media Wednesday ahead of the KFA Cup match between FC Seoul and FC Anyang at Seoul World Cup Stadium to talk about his new job. 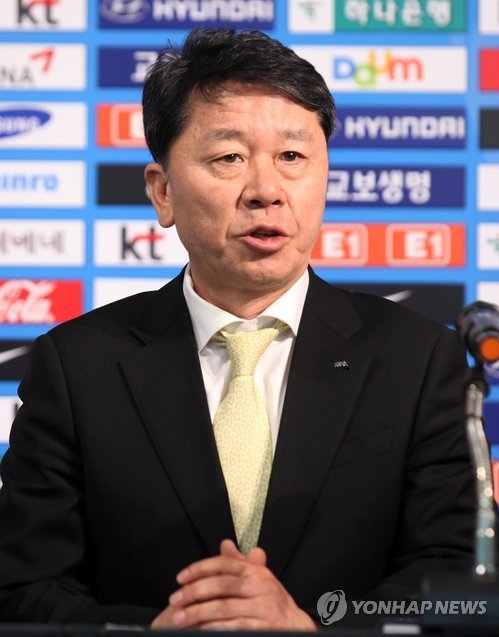