Kim Young-man, 72, was indicted for hurling an egg at and spraying ketchup on the picture, five days after parliament voted on Dec. 9 to impeach her over corruption. It was exhibited in a facility in the southern city of Changwon in commemoration of a 1960 civil uprising against election fraud.

The Masan branch of the Changwon District Court fined Kim, the leader of a local anti-Park group, 2 million won (about US$1,760) for damaging public property and breaking into a building.

Judge Choi Ji-ah said in her ruling that it is recognized that Kim entered the memorial hall illegally and compromised the utility of the exhibit.

Kim said he will appeal the ruling, adding "Park's photo was inappropriate for the hall honoring a pro-democracy uprising." 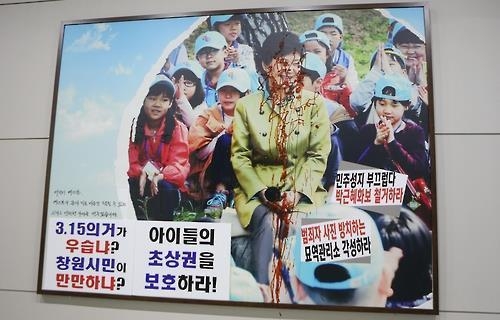 On Dec. 14, Kim and his colleagues visited the hall and demanded the removal of the photo showing Park posing with children before he damaged the picture.

Prosecutors initially filed a summary indictment. He defied it and demanded a formal trial.

On March 15, 1960, thousands of students and citizens in the city rose up amid widespread allegations of vote rigging by the Rhee Syng-man government. Rhee had ruled the country since becoming the country's first president in 1948.

The March uprising was forcibly quashed, leaving seven dead and many others injured. The deaths became the rallying point for a nationwide pro-democracy movement on April 19 that brought down the Rhee administration.