SEOUL, April 18 (Yonhap) -- Embattled Daewoo Shipbuilding & Marine Engineering Co. on Tuesday got the nod from its investors who hold some 1.3 trillion won (US$1.14 billion) worth of bonds, paving the way for the troubled shipyard to receive a fresh cash injection from its creditors.

The lifeline outlines a debt-for-equity swap for half of the company's debt and a delay in the payment for the dues for three years.

The approval by bondholders was widely expected as the National Pension Service (NPS), the largest investor in Daewoo Shipbuilding bonds, on Monday accepted the plan to keep the troubled shipbuilder afloat.

The NPS, which owns some 30 percent of the shipbuilder's corporate bonds, said it has taken into account that Daewoo Shipbuilding, the state-run Korea Development Bank (KDB) and the Export-Import Bank of Korea (Eximbank) -- the two main creditors of the shipyard -- all agreed to measures that would better ensure the repayment of corporate bonds that would be rescheduled.

In addition to holding a large part of Daewoo's bonds, the NPS owns 45.5 percent of 200 billion won worth of bonds sold by Daewoo Shipbuilding that comes due Friday.

Under the overall rescue plan, half of the shipyard's corporate bonds and commercial papers will be converted into equity with the rest being rolled over to give Daewoo some leeway. KDB and Eximbank will in exchange inject 2.9 trillion won into the company to allow it to stay in business.

Policymakers here are increasingly nervous about the possibility of Daewoo Shipbuilding facing the prepackaged plan, which will eliminate 50,000 jobs and trigger a massive cancellation of ships under construction.

So far this year, the shipyard has secured $770 million worth of orders, and targets to clinch orders worth as much as $5.5 billion. 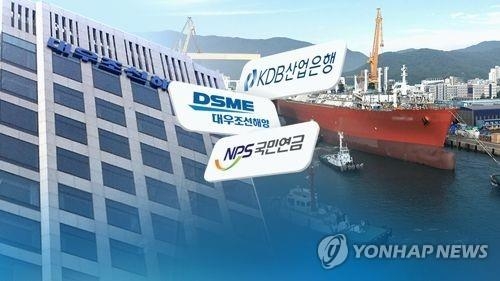