"The 'Revolution' will be available in Japan in the third quarter, followed by China over the September-December period," Kwon Young-sig, the head of the company, said during a press meeting.

Netmarble said it is preparing for the global release of the game through a customized marketing strategy for each market.

The South Korean game company has been at the center of the market's attention as it is planning an initial public offering (IPO) in May.

Last month, Netmarble Games said it wants to sell its 16.95 million shares at a price band of between 121,000 won (US$106.13) and 157,000 won, which would put the largest online game publisher's market capitalization at 13.5 trillion won, should the IPO price be set at the upper price range.

Local brokerage houses, however, have been suggesting a higher price for the firms' shares, with Hi Investment & Securities Co. suggesting 182,000 won.

Netmarble Games, established in 2000, has been producing some of the most successful mobile and online games, also including "MARVEL Future Fight," "Seven Knights" and "Everybody's Marble." 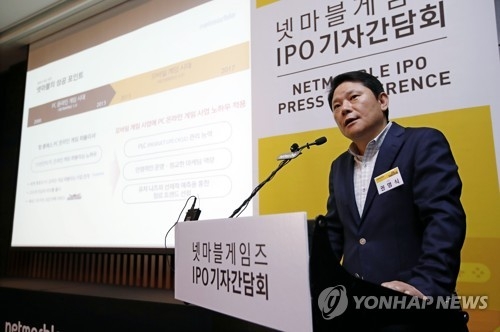 Netmarble to release hit mobile game in China this year

Netmarble to release hit mobile game in China this year