MOKPO, South Korea, April 18 (Yonhap) -- Search parties entered the wreckage of the Sewol ferry Tuesday to find the remains of those still missing following the vessel's sinking three years ago.

The government said teams are working inside the ferry, with officials aiming to complete the search within three months. A total of eight workers initially entered the ship around 1 p.m.

The 6,800-ton ferry that sank on April 16, 2014, off the nation's southwest coast claimed 304 people, most of them teenage students on a school trip. It was raised from the bottom of the sea and put into dry dock at a local port in Mokpo, some 410 kilometers south of Seoul, last week.

The bodies of nine people, including four students and two teachers, were never found.

Workers earlier drilled nine holes in the hull of the ferry to allow the search teams to enter the vessel's cabin sections on the third- and fourth-floor decks, as well as the after part of the ship.

Photos taken by workers during the first part of the search showed shattered walls and other destroyed structures in the passenger cabin section on the fourth-floor deck.

Using helmet cameras, the search team members are sending back live-broadcast videos of their operations to relatives of the missing people.

Lee Cheol-jo, a senior official at the Oceans and Fisheries Ministry in charge of the search operation, said it will take time to fully complete the search, depending on internal conditions of the ship. 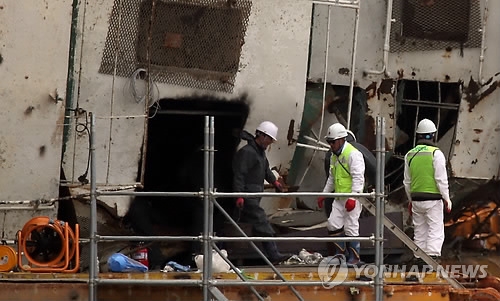