SEOUL, April 18 (Yonhap) -- A group of U.S. soldiers stationed in South Korea is participating in a taekwondo camp hosted by Seoul's defense ministry aimed at promoting their understanding of Korean culture, the ministry said Tuesday.

The event that opened earlier in the day marks the beginning of a broader half-year program, named Friends Forever, for the members of the U.S. Forces Korea (USFK).

The ministry has operated such an annual program since 1972, joined by a total of more than 19,000 personnel.

In the two-day taekwondo session, U.S. soldiers will learn the traditional Korean martial art at Kukkiwon, known as the global headquarters of taekwondo, in Seoul, along with taekwondo players of the South Korean military and the country's national team, according to the ministry. 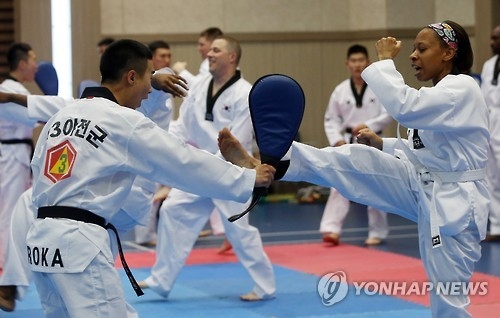 It plans to host various other programs, including tours to historical sites and the southern resort island of Jeju, as well as a "temple stay" at Haeinsa in South Gyeongsang Province, through the end of October.

It's expected to help U.S. troops have a deeper understanding of Korean culture, the ministry said.

"I appreciate the hard work of the USFK soldiers, who are playing a big role in maintaining stability and peace on the Korean Peninsula," Defense Minister Han Min-koo said in a letter to them. "I hope you will continue your efforts to establish the world's strongest and most effective combined defense system."