SEOUL, April 18 (Yonhap) -- South Korea's Acting President and Prime Minister Hwang Kyo-ahn on Monday warned that North Korea would face a "corresponding consequence" should it stage yet another provocation.

His remarks came amid growing concerns that the communist regime may engage in provocative acts such as a nuclear test or an intercontinental ballistic missile test in time for the 85th anniversary of the foundation of its Korean People's Army next Tuesday.

"Our government and the international community will not condone North Korea's reckless provocations, and would have it face a corresponding consequence (in case of its provocation)," Hwang said during a Cabinet meeting. 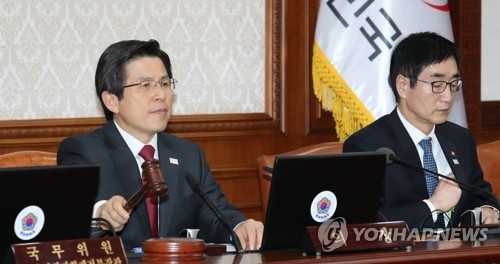 The acting president noted that Seoul has decided to strengthen the combined defense posture of South Korean and U.S. forces here and seek closer cooperation with China to carry out "strong punitive measures" in the event of North Korean provocations.

In an apparent reference to his meeting with U.S. Vice President Mike Pence on Monday, Hwang said that the allies shared the "gravity and urgency" of the North's nuclear and missile problems, and that they would work together to further strengthen pressure on Pyongyang through a thorough enforcement of international sanctions against the North.

On Tuesday, Pence ended his three-day visit to Seoul during which he warned Pyongyang against testing Washington's "resolve" and stressed its capability to counter any military attack with an "overwhelming and effective" response.

Hwang, in addition, stressed the need to bring the public up to speed on the current security situation to alleviate their security concerns.