SEOUL, April 20 (Yonhap) -- Not far away from the heavily fortified border, Mount Kumgang on North Korea's eastern coast stands tall as a symbol of inter-Korean reconciliation. Its scenic valleys, majestic peaks and historic sites used to bustle with South Korean tourists in the historic joint program launched in 1998 between the two Koreas.

Twenty years later, those fond memories have faded. The tour came to a halt after a South Korean woman was killed by a North Korean soldier at the mountain resort in 2008. With no signs of improvement in inter-Korean ties, its resumption remains an illusive hope.

"The suspension has made businessmen investing in the tour project almost wither," says Kim Jin-soo, a businessman who used to operate two duty-free shops at the mountain resort.

"Chiefs of some firms became delinquent borrowers. Some are living hand to mouth," the vice chairman of the Mount Kumgang Investment Companies Association added.

He is among some 30 small and medium-sized business owners who invested in the tour project and have almost given up hope for its resumption amid North Korea's persistent nuclear and missile provocations. 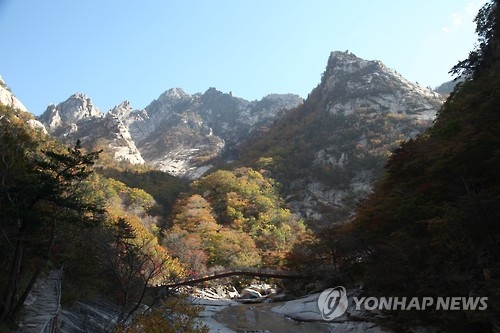 Along with the now-shuttered joint industrial park in Kaesong, the issue of resuming the tour project is gaining attention in the political arena ahead of South Korea's presidential election on May 9.

The tour program kicked off in line with late liberal President Kim Dae-jung's sunshine policy of engaging the North.

The tour project started with a cruise service. A land route was opened in September 2003, making it easier for South Koreans to visit the mountain with pristine beauty that was long off limits to them due to inter-Korean division.

Hyundai Asan, the main operator of the tourist program, had attracted some 2 million South Korean visitors until the trips were halted due to the fatal shooting incident.

In July 2008, South Korean Park Wang-ja was shot and killed before dawn when she wandered into a restricted zone at the mountain resort. Seoul halted the project, calling on the North to apologize for the incident and guarantee the safety of South Korean tourists.

The joint tour program was believed to be a rare cash cow for money-strapped North Korea, along with the joint factory zone in North Korea's border city of Kaesong.

North Korea recently said it is inviting foreign investment in a cruise program based in the port of Kosong near the mountain. It also promised special permission to run a casino on the ship.

The latest move is part of North Korean leader Kim Jong-un's plan to develop the international tourism zone spanning from the eastern port city of Wonsan to Mount Kumgang.

"In the face of tight international sanctions, North Korea is seeking to earn hard currency. A casino is an incentive for foreign investment," said Kim Young-hui, head of the North Korean Economy Team at Korea Development Bank (KDB).

With the South Korean presidential election less than 30 days away, liberal presidential candidates raised the need to resume such reconciliatory projects. Conservative hopefuls instead put the priority on resolving North Korea's nuclear issue before holding any dialogue.

But deciding whether or not to restart the inter-Korean projects may not be easy due to the possibility that South Korea could violate U.N. sanctions resolutions against North Korea, experts say.

In February 2016, Seoul shut down the Kaesong Industrial Complex. The then-conservative government claimed that money generated from the factory zone was suspected of bankrolling North Korea's nuclear and missile programs.

The resumption of the tour program is linked to whether it would violate the U.N. sanctions resolution banning the transfer of bulk cash to Pyongyang.

"Judgment over whether it would violate the U.N. resolution has yet to be made," said an official at Seoul's unification ministry.

"But inter-Korean projects were suspended mostly because of North Korea's nuclear ambitions. The government will be able to review whether to resume the tour project after conditions for inter-Korean dialogue are met." 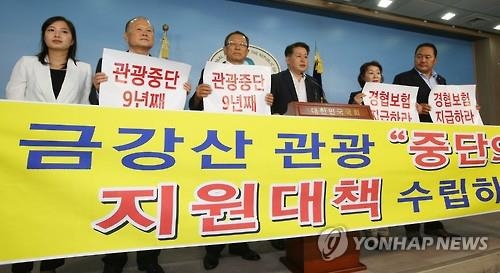 The companies that operated in the tour zone rejected views that the money spent by South Korean tourists could have been funneled into Pyongyang's nuclear and missile programs.

"A large amount of the money paid by tourists came back to Hyundai Asan and investors like us, not to North Korea," he claimed. He previously offered bus services transporting tourists.

Choi Yo-sik, chairman of the Investment Companies Association, said that the firms are suffering from "double-edged" troubles.

"We are undergoing financial difficulties due to the suspension. There are some negative sentiments that the tour project could help North Korea's nuclear and missile programs," he said.

The companies are calling for the government to further compensate them for their investment losses stemming from the suspension.

They said they invested a combined 170 billion won (US$149 million) into the project, claiming that they have not received sufficient compensation for that.

"The government should make up for our losses in a similar manner to the financial support for firms running factories at the Kaesong complex," said Kim, vice chairman of the group.

The Ministry of Unification said it provided around 22 billion won in special loans to the firms investing in the tour project. About 400 million won in emergency funds was given to them as well.

Experts said that if North Korea does not show sincerity in resolving its nuclear and missile problems, the resumption of the Mount Kumgang project would be elusive.

"At least, North Korea should make pledges to suspend a nuclear test and an intercontinental ballistic missile launch as preconditions for re-opening the project," said Cheong Seong-chang, a senior research fellow at the Sejong Institute.

He suggested that Seoul could offer a package deal of resuming the Kaesong factory park and the tour project and lifting the May 24 sanctions against the North in exchange for Pyongyang's vow to halt provocations.

"Also, we can call on the North to accept regular reunions of families separated by the 1950-53 Korean War under such a deal," Cheong added.

Kim, an analyst at KDB, raised the need to change the way the tour project is operated, as the U.N. sanctions curb financial transactions with North Korea.

"The development of the Mount Kumgang tour zone is also a crucial project for Kim Jong-un," she added. "Instead of providing cash, Hyundai may think about infrastructure investment. The North would not reject the offer for its economic growth."" 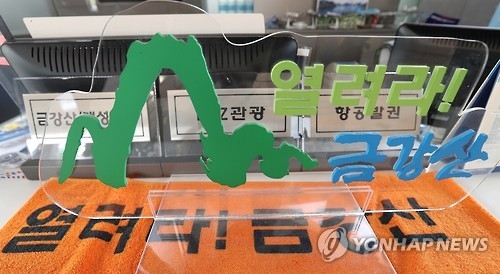