Announcing his environmental election pledges, Hong's campaign said he would launch joint efforts with Beijing to study and curtail fine dust, and push to establish an international organization to improve air quality in Northeast Asia.

Fine dust has been a major source of health concerns for city dwellers here. Fine dust particles, known to cause various respiratory problems, are thought to originate from both the western deserts of China and domestic smog sources.

To allay public concerns over air pollution, the prosecutor-turned-politician pledged to increase the number of air purifiers in public facilities, such as schools and hospitals, and reduce pollutant emissions from coal-fired power plants.

He also said that if elected, he will push to expand restrictions on old diesel-powered cars in all metropolitan cities and extend fuel subsidies for buses that run on compressed natural gas.

His pledges also include increasing the proportion of environment-friendly vehicles to 35 percent of the country's new car sales by 2022. The 35 percent represents 350,000 new vehicles to be sold annually.

In recent opinion polls, Hong has ranked a distant third with his support ratings boxed in woeful single digits. The election race is increasingly seen as a duel between front-runner Moon Jae-in of the liberal Democratic Party and runner-up Ahn Cheol-soo of the center-left People's Party. 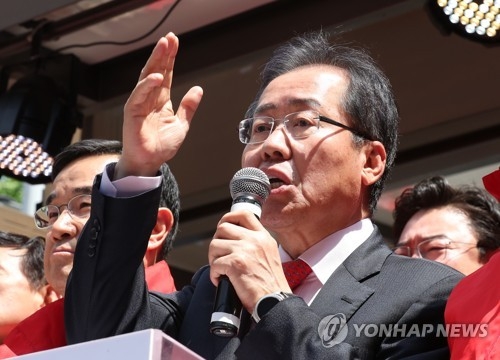