SEOUL, April 18 (Yonhap) -- Presidential candidate Ahn Cheol-soo claimed Tuesday that the North Korean regime of Kim Jong-un is "afraid" he will take power because of his strong commitment to national defense.

The nominee of the center-left People's Party made the claim in response to a North Korean media report that disparaged him as the "lesser evil" for conservatives in an election shaping up to be a two-way race between Ahn and Moon Jae-in of the liberal Democratic Party.

"North Korea has referred to me as the lesser evil. The Kim Jong-un regime is afraid of me," the candidate said on his campaign trail in Daegu, 302 kilometers southeast of Seoul. "They are afraid of the firm alliance between South Korea and the U.S., and of strong independent defense capabilities."

Critics have accused Ahn of lacking principles on national security, saying he reversed his position to accept the deployment of a U.S. missile defense system in South Korea.

Ahn was speaking in a conservative stronghold at a time when North Korea has ratcheted up regional tensions with threats of another nuclear or missile test.

In the absence of a strong conservative contender, conservative voters who are sensitive to North Korea issues have been swaying in favor of Ahn over the liberal front-runner advocating engagement with Pyongyang.

"I issue a clear warning to the Kim Jong-un regime of North Korea," Ahn said. "Abandon your nuclear weapons. Stop your provocations." The presidential election is set for May 9. 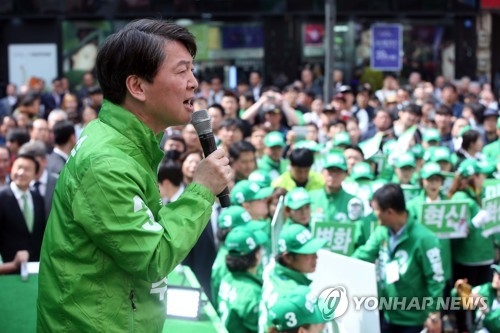 Ahn says Pyongyang regime is 'afraid' of his election

Ahn says Pyongyang regime is 'afraid' of his election