During his meeting with Angola's Foreign Minister Georges Rebelo Chikoti, Hwang took note of the African state's cooperation in enforcing international sanctions against Pyongyang, which has heightened cross-border tensions with a series of missile tests in recent months.

On the economic front, Hwang expressed his expectation for expanded business exchanges. Chikoti explained to him Angola's efforts to diversify its economy and called for greater cooperation from Seoul.

Last year, two-way trade reached US$730 million with South Korea exporting to Angola $550 million worth of products, such as cars and construction equipment, and importing 170 million worth of items such as liquefied petroleum gas and iron.

During the meeting, Chikoti delivered to Hwang a letter from Angolan President Jose Eduardo dos Santos. In the letter, the president "highly" evaluated the bilateral relationship, which was established in 1992, and voiced hopes for its continued development, according to the press release. 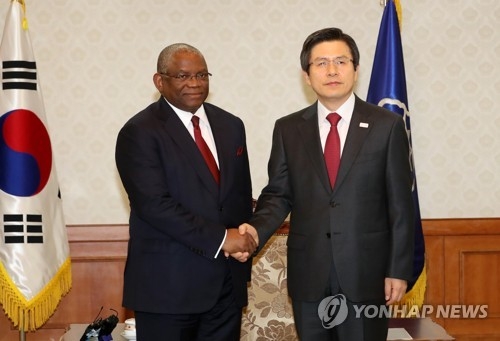