WASHINGTON, April 18 (Yonhap) -- U.S. President Donald Trump said Tuesday it makes no sense to start a trade war with China when Beijing is trying to help the U.S. with North Korea, rejecting criticism that he's softened his stance on the country.

"I haven't changed my stance. China's trying to help us. I don't know if they are going to be able to or not, but do I want to start heavy, heavy trade or currency manipulation statements against somebody who's out there trying to stop what could be a very bad situation?" Trump said in an interview with Fox News. 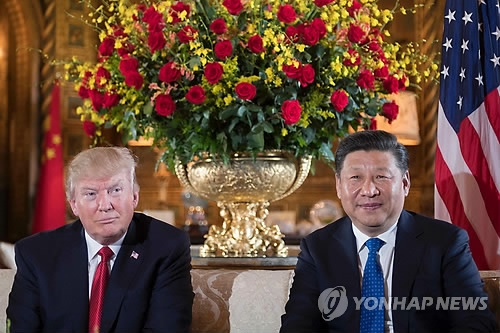 Trump held his first summit talks with Chinese President Xi Jinping earlier this month with a focus on North Korea. He has since praised China for trying to increase pressure on Pyongyang. Trump has also decided against labeling Beijing a currency manipulator, saying it could jeopardize efforts to solve the North Korea problem.

Trump said he has a good chemistry with Xi.

"He understands it's a big problem. He's working on it. Now, what am I going to do, start a trade war with China in the middle of him working on a bigger problem, frankly, with North Korea?" Trump said. "We'll see what he can do. Now maybe he won't be able to help. That's possible. I think he's trying, but maybe he won't be able to help and that's a whole different story."

Trump said China has never dealt with the North in a way that it is dealing right now.

Asked about military options on the North, Trump declined comment.

"I don't want to telegraph what I'm doing or what I'm thinking. I'm not like other administrations, where they say we're going to do this in four weeks," he said. "It doesn't work that way. We'll see what happens. I hope things work out well. I hope there's going to be peace."

Pressed again for what he'll do in the event of another missile launch by the North, Trump only said, "We'll find out."

"You look at different things over the years with President Obama. Everybody has been outplayed. They've all been outplayed by this gentleman," he said.

Trump says it makes no sense to start trade war with China when Beijing trying to help with N.K.

Trump says it makes no sense to start trade war with China when Beijing trying to help with N.K.