WASHINGTON, April 18 (Yonhap) -- A U.S. Navy strike group led by the aircraft carrier USS Carl Vinson was thousands of miles away from the Korean Peninsula over the weekend despite widespread belief it would be in the region to deter North Korea, news reports said Tuesday.

CNN also cited unidentified defense officials as saying that the group would participate in naval exercises with the Australian navy south of Singapore before heading to Korea, and is expected to arrive off the Korean Peninsula at the end of the month.

That contrasts sharply with the belief that the group was heading directly to waters off Korea amid fears Pyongyang could conduct a nuclear test as early as this past Saturday to mark the birthday of national founder Kim Il-sung, grandfather of current leader Kim Jong-un.

Instead, on Saturday, the strike group was about 3,500 miles away from Korea, passing through the Sunda Strait between the Indonesian islands of Sumatra and Java, according to Defense News. The Washington Post said the group was in the Indian Ocean later in the day, a direction opposite to Korea.

U.S. officials had earlier said that the ships were scheduled to participate in exercises with Australia, but were redirected to waters off Korea, an unusually massive show of force designed to warn Pyongyang against additional provocations.

President Donald Trump also touted the dispatch, saying the U.S. is sending an "armada" to waters off Korea. Some media outlets even interpreted the dispatch as a sign of U.S. willingness to launch a preemptive strike against the communist nation.

It was unclear why the U.S. decided to have the ships participate in the previously planned exercises, rather than heading directly off to Korea.

Comment from the Defense Department was not immediately available. 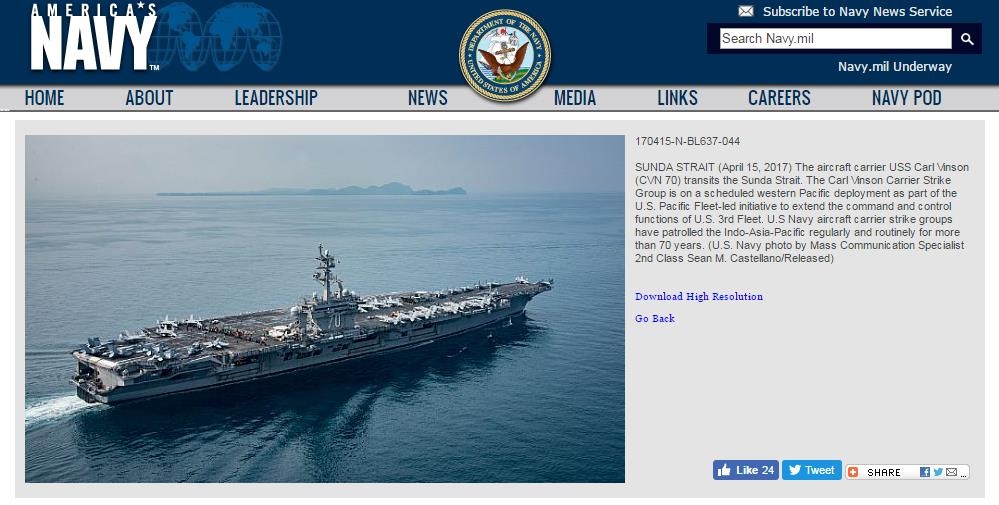