WASHINGTON, April 18 (Yonhap) -- North Korea's use of tracked transporter erector launchers, instead of wheeled vehicles, in its military parade over the weekend could be a result from China's crackdown on sales of large vehicles to the communist neighbor, a U.S. expert said Tuesday.

The North put on a massive military parade on Saturday to mark the anniversary of the birth of national founder Kim Il-sung, grandfather of current leader Kim Jong-un, showcasing some of its best military hardware, including ballistic missiles.

Some missiles were carried on wheeled TELs, and some others on tracked TELs.

"One of the things I found interesting is the use of the track TELs, transporter erector launchers. I view this as the symptom of China cracking down on the sale of wheeled -- large, heavy-duty wheeled vehicles that can be used as TELs to North Korea," Joseph Bermudez, an expert on North Korea military, said during a conference call briefing organized by the website 38 North.

"A track TEL is not an optimal TEL in North Korea to have for its missiles. They don't move fast, they have excessive vibrations and ballistic missiles don’t like vibrations. They have a limited range. This poses challenges in the operational sense for ballistic missiles mounting," he said. 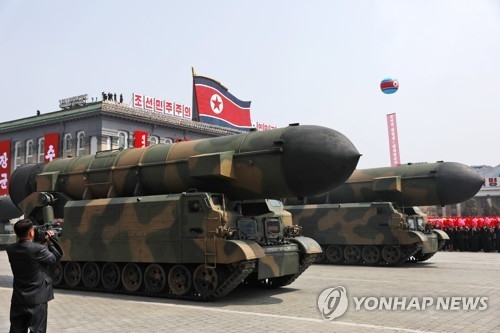 N. Korea's use of track TELs could be due to China's crackdown on exports: U.S. expert

N. Korea's use of track TELs could be due to China's crackdown on exports: U.S. expert