SEOUL, April 19 (Yonhap) -- North Korea has unveiled a song about the country's artillery unit in charge of ballistic missile launches as it is promoting the development of its missile program, Pyongyang's state media reported Wednesday.

The song extolling missile launches carried out by the Hwasong artillery units of the Strategic Force under the Korean People's Army was released at the latest performance to mark the late state founder's birthday.

It was among a list of songs sung by the State Merited Chorus during the performance Sunday for participants of a military parade marking the 105th anniversary of Kim Il-sung's birth, the Korean Central News Agency reported Monday.

Footage of an intermediate-range Musudan ballistic missile, called Hwasong-1 in North Korea, being launched was shown on a giant screen at the performance hall, according to the state-run TV station.

The lyrics for the song include "Our proud Hwasong rocket blasts off" and "It flies as quickly as a flash of lightning to challenge imperialism."

The move came amid growing tensions on the Korean Peninsula over North Korea's nuclear and missile programs. There is speculation that it may carry out its sixth nuclear test or launch an intercontinental ballistic missile (ICBM).

At the military parade Saturday, North Korea unveiled what appeared to be three types of ICBMs in a show of force, vowing to respond with nuclear attacks to Washington's possible pre-emptive strike. 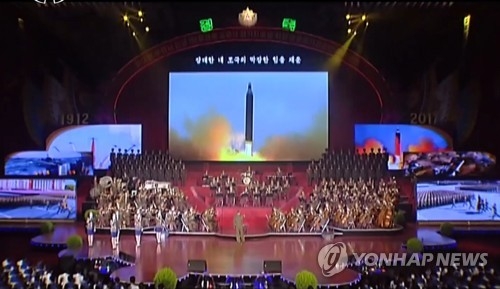