The Ministry of Trade, Industry and Energy said the "Korea Sale FESTA," will take place from Sept. 28 to Oct. 31, overlapping with the week-long Korean Thanksgiving holiday which falls on Oct. 4. The plan was endorsed by a ministerial meeting chaired by Finance Minister Yoo Il-ho.

During the special bargain sales event, major retailers and manufacturers will offer discounts on various items such as electronics, clothing and cosmetics.

A variety of cultural and entertainment events will be also held across the country, with special discount programs on shopping, accommodation and transportation for foreign shoppers.

This year's festival is the third of its kind since the government initiated a shopping festival called "Korea Grand Sale" in 2015 as part of efforts to prop up the national economy hit hard by the Middle East Respiratory Syndrome outbreak. 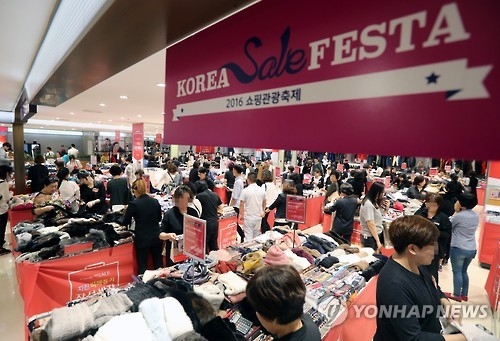 Meanwhile, the government also unveiled a plan to inject 10.1 trillion won (US$8.86 billion) to help start-ups grow in the coming three years.

"We will support people to create and grow start-ups and earn profits and will give those who fail a second chance to do business again," said Finance Minister Yoo.

On widespread optimism about an economic turnaround, the top economic policymaker remained prudent, saying, "It's too early to say that the economy is on a clear recovery path."

He said there are still lingering uncertainties at home and abroad, including North Korean issues and possible trade disputes between the United States and China.

"We need more effort to boost investment, employment and consumption," said Yoo. "We may feel the uptick when such uncertainties ease. We can't be optimistic all the time."