SEOUL, April 19 (Yonhap) -- The Korea Railroad Corp. (KORAIL) said Wednesday it will begin testing double-decker bullet trains on railways this year so they can start commercial operations in 2023.

Tests of the specially configured bullet trains may start in November when Hyundai Rotem is scheduled to complete production of the passenger coaches, an official at the state-run railway company said.

A double-decker bullet train can offer 1,404 seats compared to the current KTX train's capacity of 931 seats. KTX trains are usually driven by two engines and have some 10 coaches.

KORAIL President Hong Soon-man toured Paris early this month to board the TGV Duplex trains which currently dominate the European double-decker market. KORAIL hopes South Korea will be able to compete with French, Japanese and Chinese competitors in the global market in the near future.

France has been leading the market with the introduction of the TGV Duplex in 2007 with the ratio of double-decker trains accounting for 47 percent of the TGV market.

KORAIL also plans to introduce double-decker freight trains next year as it has recently tested a newly developed container flat car in Busan.

"We are planning to complete the test runs of the two-level deck cargo trains by the end of the year before seeking ways to commercialize them in cooperation with KORAIL," said an official with the Korea Railroad Research Institute, which manufactures the high capacity rolling stocks. 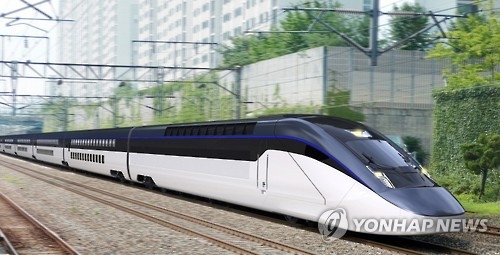