Outbound shipments of industrial parts and materials jumped 11 percent on-year to US$65.8 billion in the January-March period, accounting for 49.7 percent of the country's overall exports, according to the data compiled by the Ministry of Trade, Industry and Energy.

It marked the first double-digit growth since the third quarter of 2013, when shipments hit 13.9 percent.

Imports also rose 10.9 percent on-year to $40.3 billion over the three-month period, with the country posting a trade surplus of $25.5 billion in the sector.

Exports of chemicals soared 24.3 percent on-year to $10.6 billion on the back of rising oil prices, while those of electronic parts rose 19.7 percent to $23.7 billion on brisk overseas sales of semiconductors.

Some $20.1 billion worth of industrial materials and parts were shipped to China over the cited period, up 1.5 percent from a year earlier, despite Beijing's hostile measures against South Korean goods in retaliation for Seoul's plan to deploy the U.S.-led missile defense system, or THAAD.

Meanwhile, exports to the United States inched down 1.8 percent to $6.6 billion over the period. 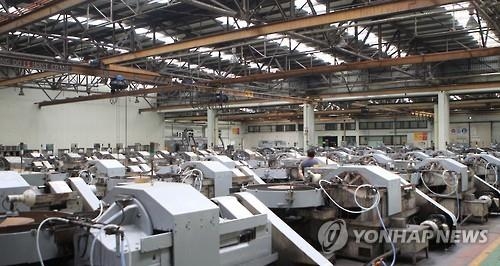