The U.S. Pacific Command said in early April the Carl Vinson fleet, which was scheduled to participate in the exercises with Australia redirected to waters off Korea amid growing tensions over North Korea's new provocations.

But The New York Times on Monday (U.S. time) reported that the nuclear-powered carrier and three warships were still sailing to Australia at the time of the announcement and eventually took part in the drills as originally scheduled.

The France-based AFP also reported that the Carl Vinson was in waters northwest of Australia as of Monday and about to move toward seas near South Korea within the next 24 hours.

"USS Carl Vinson has carried out joint exercises with Australia over the past several days," the military source here said.

"The exercises were wrapped up, and the USS Carl Vinson will sail to the Korean Peninsula," the source said, adding that South Korea and the U.S. are discussing plans to conduct a joint exercise with the Carl Vinson after it arrives in South Korea's East Sea sometime between April 25 and 28. 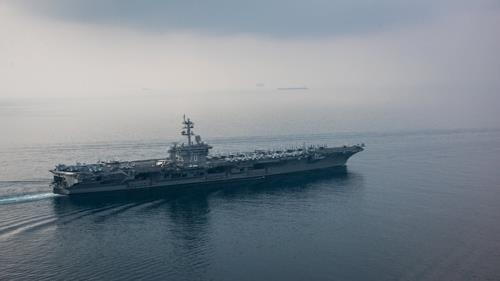