SEOUL, April 19 (Yonhap) -- One out of three middle-aged men in South Korea show risky drinking patterns, suggesting heavy alcohol dependence, a study said Wednesday based on a health and nutrition survey carried out on more than 15,000 people.

The study was conducted by professors Kim Dong-jun and Hong Jae-won of Inje University Ilsan Paik Hospital, who analyzed the results of the 2009-2011 survey on 15,215 people, who were divided into male and female, and into three age groups of 19 to 44, 45 to 64 and over 65.

A diagnosis of high-risk alcohol drinking patterns include frequency and volume of drinking, level of self-control, and alcohol abuse and dependence. The professors used the Alcohol Use Disorders Identification Test (AUDIT) from the World Health Organization to detect people in the risk categories.

The conclusion was that 28.3 percent of men in the 45-64 age group showed drinking patterns requiring testing for alcohol dependence. The number was the highest among all test groups.

"We were able to confirm that the high-risk drinking pattern was more frequent among men, especially for the middle-aged," Hong said. "It's significant that the study provides statistical figures that not only reflect the amount of alcohol consumption but the behaviors of drinking as well." 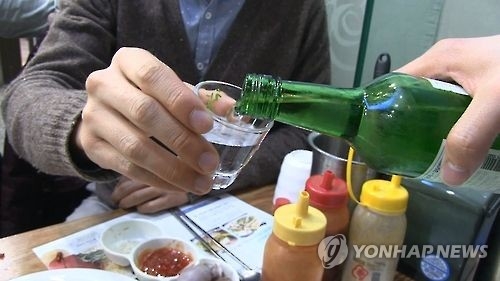