SEOUL, April 19 (Yonhap) -- The head of South Korea's state-run overseas aid agency offered to resign on Wednesday amid allegations that his appointment was influenced by a woman who is at the center of a corruption scandal that led to the ouster of former President Park Geun-hye, the foreign ministry said.

Kim In-sik, 68, president of the Korea International Cooperation Agency (KOICA), recently delivered his intention to step down to the ministry, which is supervising its operation, according to the source.

"He submitted his resignation letter today," the ministry said. "A related administration process will start."

A recent investigation found that Kim's choice as the KOICA head was recommended by Park's close confidante Choi Soon-sil, seeking to make profits from a project in Myanmar. Earlier this month, South Korean Ambassador to Myanmar Yoo Jae-kyung also offered to resign after he was revealed to have been recommended by Choi.

Choi was arrested last year for extorting a large amount of money from businesses by using her longtime relationship with Park. The scandal prompted monthslong nationwide protests and eventually cost Park her presidency in March.

Kim's departure will likely be completed at the latest before the presidential election to be held on May 9 to fill the void caused by Park's ouster.

Kim spent most of his career at the Korea Trade-Investment Promotion Agency (KOTRA). He was named the head of KOICA in May last year after serving as president of the KINTEX exhibition hall, located north of Seoul, from 2005-2008. 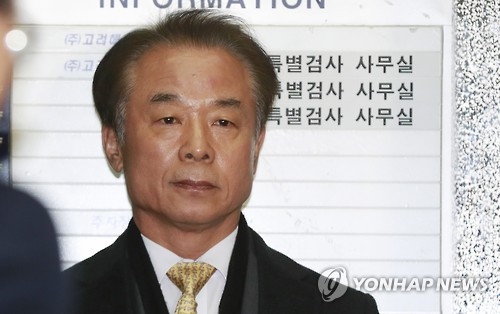