SEOUL, April 19 (Yonhap) -- Samsung Electronics Co. said Wednesday around 260,000 units of Galaxy S8 smartphones were registered with the country's three mobile carriers on the first day of its preliminary release.

Local consumers who purchased the Galaxy S8 smartphones through preorders started receiving the devices Tuesday, ahead of the official launch in South Korea and the United States slated for Friday.

Preorders for the Galaxy S8 and the Galaxy S8 Plus, which ran from April 7-17, surpassed 1 million units, the company said, setting a new record among all of the company's smartphones so far.

Industry watchers said earlier that around 70 to 80 percent of the preorders should lead to actual sales.

The number of first-day registrations of the Galaxy S8 smartphones beat the previous record of around 150,000-160,000 units posted by the ill-fated Galaxy Note 7 last year. 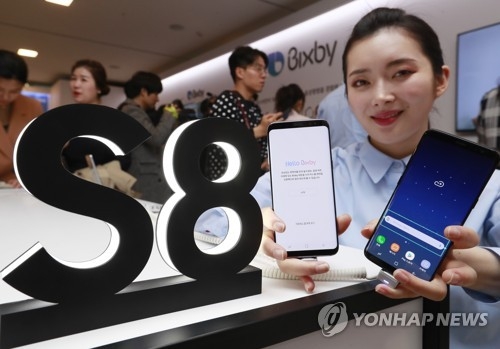