SEJONG, April 19 (Yonhap) -- The number of fathers at private firms who took childcare leave showed a steep rise in the first quarter of the year, pushing the percentage of men on such leave above the 10-percent threshold for the first time, government data showed Wednesday.

The figure for the January-March period gained 54.2 percent from a year earlier to 2,129, with fathers accounting for 10.2 percent of all 20,935 people on childcare leave, the Ministry of Employment and Labor said.

The ratio of men taking childcare leave was up 3.7 percentage points from 6.5 percent recorded in March last year, raising the prospect that it will rise above the 10 percent level this year from 8.5 percent last year.

Yet the rate still lags well behind those of other advanced countries, as the ratios in Norway, Sweden and German were 21.2 percent, 32 percent and 28 percent, respectively, in 2015.

The increase in more men taking childcare leave reflects that the culture of workers juggle family life and work has quickly drawn the attention of large firms and companies are taking a positive stance toward men on parental leave. 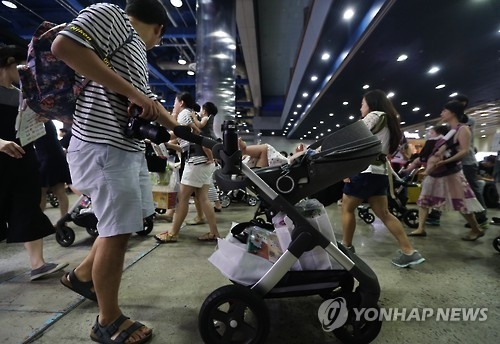 No. of fathers taking childcare leave soars 54.2 pct in Q1

No. of fathers taking childcare leave soars 54.2 pct in Q1