SEOUL, April 19 (Yonhap) -- Presidential candidate Ahn Cheol-soo pledged Wednesday to improve the quality of jobs and enhance their fairness if elected in the upcoming vote.

The nominee of the center-left People's Party made the pledge during a visit to the Federation of Korean Trade Unions, one of the two largest umbrella labor organizations in the country. 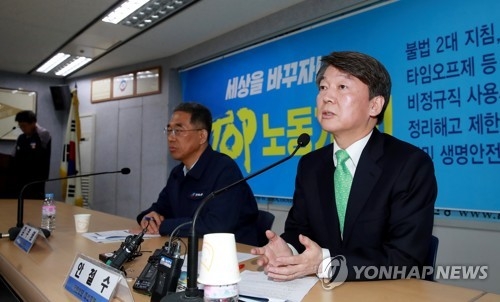 "I will change the direction of jobs policy to focus on improving the quality of jobs and heightening their fairness, rather than simply increasing their number," he said. "I will put right the wrong and failed policies that were pursued under the (previous) Park Geun-hye administration."

The former software mogul said he would drastically reduce the number of irregular jobs and raise salaries at small and medium-sized firms to make them appealing to the youth. He earlier announced plans to provide government support to temporarily hike the salaries of youths at small and medium-sized enterprises to 80 percent of what their counterparts at large businesses receive. They currently receive about 60 percent.

Ahn is in a duel with Moon Jae-in of the liberal Democratic Party ahead of the May 9 election.