LOS ANGELES, April 19 (Yonhap) -- Ryu Hyun-jin of the Los Angeles Dodgers has dropped his third straight game of the 2017 season, once again getting undone by long balls.

Ryu gave up four earned runs on seven hits, including three home runs, in six innings against the Colorado Rockies at Dodger Stadium in Los Angeles on Tuesday (local time), as the Dodgers fell 4-3. Ryu struck out seven and walked one.

This was Ryu's third start of the season, after being held to just one start over the past two years with shoulder and elbow problems.

Colorado slugger Nolan Arenado touched Ryu for two home runs and Trevor Story had another, as Ryu dropped to 0-3 on the season. It was the first time Ryu has given up three homers in a game since his major league debut in 2013.

The South Korean left-hander now has a 5.87 ERA in 15 1/3 innings in 2017. He lasted just 4 2/3 innings in each of his first two starts, before making it out of the fifth inning for the first time Tuesday.

Ryu allowed a leadoff double to Charlie Blackmon in the top of the first, and two batters later, Arenado went deep to left center for an early 2-0 lead for Colorado.

Story added to the Rockies' lead with a solo blast in the fourth inning. The Dodgers got a run back in the bottom of the fourth, but Arenado restored a three-run cushion for the Rockies with a solo shot in the top fifth. 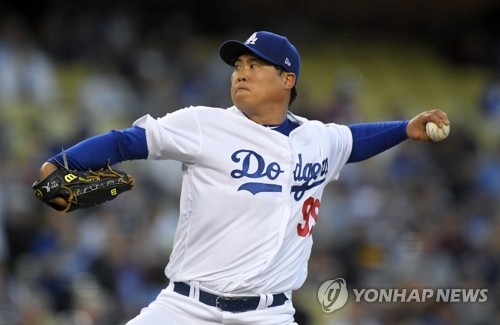 This was Ryu's second start against the Rockies this season. In the first meeting, Ryu gave up two earned runs in 4 2/3 innings on April 7 to take the loss at Coors Field in Denver.

Ryu has already allowed six home runs this season, tied for the National League lead, compared to just eight long balls in 152 innings in 2014, his last full season in the majors.

The pitcher has been getting little run support from his lineup. In Ryu's three starts, the Dodgers have scored a grand total of two runs -- one against the Rockies on April 7, none versus the Chicago Cubs last Thursday and one on Tuesday.

Ryu has had trouble getting his fastball velocity up to his previous level. In all three outings this season, his four-seam fastball has sat around 88 mph. He would reach over 90 mph in early innings before taking a noticeable dip in later innings.

Ryu entered the game with an average fastball speed of 89.3 mph, more than 3 mph slower than the major league average.

On a brighter note, this was Ryu's longest outing of the season. After making 77 pitches in each of the two previous starts, Ryu threw 97 pitches this time, 64 of them for strikes.