SEOUL, April 19 (Yonhap) -- An agency claiming to help the son of the slain brother of North Korea's leader has openly asked South Korean presidential contenders to reveal their stances on the protection of North Korean defectors on the run abroad.

The website for Cheollima Civil Defense, seen on Wednesday, asked the candidates for the May 9 presidential election whether they are willing to accept and protect every North Korean in need of shelter.

"In the past, the government's policy on defectors fluctuated, depending on the (political line of) the president," said the organization, which is presumed to be helping North Korean defectors.

"We cannot help those who want to reach South Korea if a new regime does not guarantee the safety of North Korean defectors," it added. "We will carefully wait to see candidates' positions through media reports."

Kim Han-sol, the son of Kim Jong-nam, appeared in an online video clip uploaded on the YouTube channel of Cheollima Civil Defense in March. He said his father was killed as concerns about his family's safety increased following the assassination of Kim Jong-nam in Malaysia on Feb. 13.

The half brother of North Korean leader Kim Jong-un was killed at an airport there after two Asian women allegedly smeared banned chemical weapon VX nerve agent on his face.

Details about Cheollima Civil Defense have not been known, but some experts claimed that the agency may be related to South Korea's intelligence authorities.

Lee Duk-haeng, spokesman at South Korea's unification ministry, said at a briefing that it has no information about the organization. 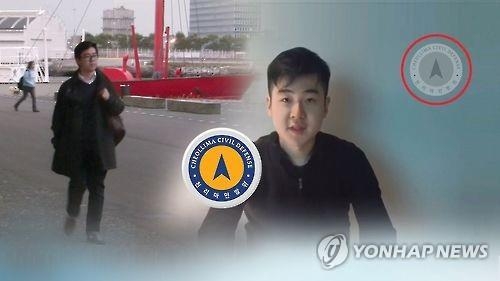