MOKPO, South Korea, April 19 (Yonhap) -- Salvage workers are examining the fourth-floor deck inside the wreck of the Sewol ferry on Wednesday, in their second day of searching for the remains of nine people who are still unaccounted for.

A total of nine access holes were made into the hull of the 6,800-ton ferry to allow the workers to gain access to the vessel.

A smartphone was found on the fourth-floor deck near the bow of the ship on Wednesday morning, officials said.

It marks the second time that a smartphone has been found on the vessel. The first was retrieved during the process of raising the ship.

Separately, preparations are underway to let workers enter the fourth-floor deck near the aft of the ship.

Officials said it could take three days for the preparations to be completed so the search can be carried out in that part of the ship.

Once access is gained, search teams will comb the area, which is where six of the nine victims may have been when the ferry capsized three years ago.

Among the items found so far within the wreck were a few pairs of shoes, two suitcases, two backpacks and two pairs of trousers, making the total tally of recovered lost items so far 126, officials said.

The Sewol ferry that sank on April 16, 2014, off the nation's southwest coast claimed 304 people, most of them teenage students on a school trip. It was raised from the bottom of the sea and put into dry dock at a local port in Mokpo, some 410 kilometers south of Seoul, last week.

The bodies of nine people, including four students and two teachers, were never found during the monthslong search that took place after the tragedy. 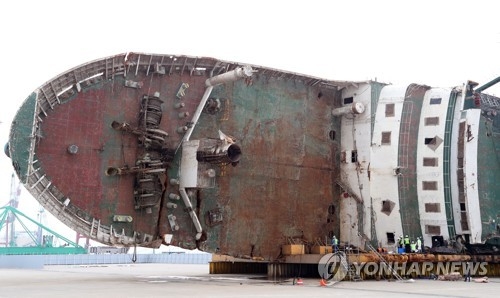