SEOUL, April 19 (Yonhap) -- During a military parade last week, North Korea's leader did not shake hands with Kim Won-hong, who made his first public appearance following his alleged dismissal as spy chief, footage by the state-run TV station showed Wednesday.

Kim Jong-un shook hands with key officials lining up at a reviewing stand after overseeing the military parade on Saturday to mark the 105th birthday of late state founder Kim Il-sung, according to footage unveiled by the Korean Central TV Broadcasting Station.

The North's ruler said something to Kim with his finger pointing to the former minister of state security, the footage showed.

But he skipped a handshake with Kim, though the ex-spy chief made a military salute in a possible indication that Kim Jong-un may still harbor ill feelings about him.

Seoul's unification ministry said in February that Kim, 72, was fired in mid-January following a probe by the ruling party into the spy agency. 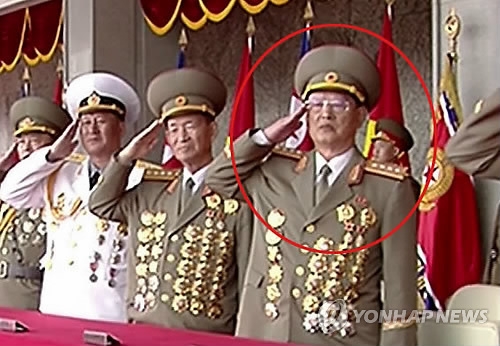 He was fired over suspicions that the intelligence agency committed wrongdoing including human rights violations, abuse of power and corruption, it said. An unidentified number of the spy agency's officials were executed.

But he appeared at the military parade, wearing the badge of a general, in a possible sign that he may have been reinstated. Kim's military rank was demoted to major general due to the reported dismissal.

Nam Sung-wook, a professor at Korea University, said that Kim Jong-un's avoidance of the handshake appears to be a warning message not to behave rashly.

"The former spy chief may have difficulty in fully restoring his power even if he has been reinstated," he added.

The Ministry of Unification said that it is not certain whether Kim may have been reinstated as he was not spotted at other major events related to Kim Il-sung's birthday.