During a press conference, the candidate of the conservative Liberty Korea Party reiterated his pledge to bring in U.S. tactical nuclear arms to the peninsula to achieve "nuclear balance" with the communist neighbor and strengthen the nation's missile defense.

"With the North having advanced its nuclear capabilities, the only way to safeguard our peace is a nuclear balance," Hong said. "Our security aim is to secure peace through armament based on power superiority (over the North) and protect our free democracy." 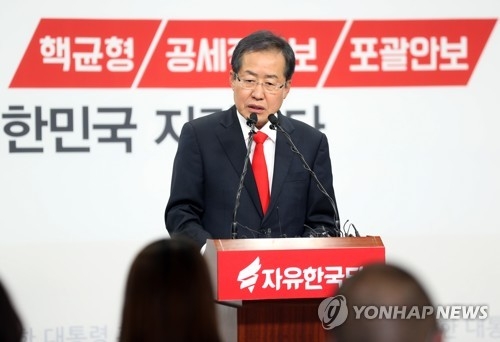 Portraying the North as an "abnormal, rogue" state, the prosecutor-turned-politician vowed to scrap past policy approaches that pursued negotiations or talks based on reciprocal exchanges or the belief that the North would behave as a "normal" state.

"Past policy (approaches) based on such principles (of reciprocity) have all failed, and we need a paradigm shift in our North Korea policy," he said.

"Until the North abandons its nuclear ambitions and stops threatening our security, we will cooperate with the international solidarity anchored in the universal values of human rights, justice and freedom."

As the backbone of the U.S. naval missile interception program, the SM-3 is designed to shoot down hostile missiles at altitudes of around 150 kilometers in the "mid-course" phase. If deployed, it could likely trigger friction with neighboring states such as China and Russia.

Hong also pledged to consider installing two or three batteries of the THAAD system, another key element of the U.S. missile defense program.

"I will make sure that by strengthening security cooperation with the U.S. through the redeployment of U.S. tactical nuclear arms and the installation of two to three THAAD batteries here, the deterrence capabilities of the world's No. 1 U.S. military will be extended to the peninsula," he said.

The U.S. withdrew tactical nukes after the two Koreas issued a joint denuclearization declaration in 1991.

Hong, in addition, pledged to push for the creation of a new naval fleet tasked with defending South Korea's easternmost islets of Dokdo and Ieodo south of Jeju Island.

Japan has persistently claimed sovereignty to Dokdo to the detriment of its ties with South Korea. Ieodo, a submerged rock in the East China Sea, has also been a source of diplomatic tension as it lies in the overlapping exclusive economic zones of Korea and China.

Seoul has a small police detachment to Dokdo, while it runs a maritime research station on Ieodo.

During the meeting, he described the alliance between Seoul and Washington as a "life-or-death" issue, indicating he prioritizes the long-standing security partnership over the relationship with Beijing.

He also showed his strong support for the THAAD deployment. 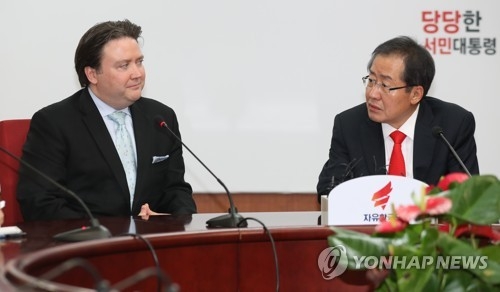 In recent voter surveys, Hong has ranked a distant third with his support ratings in woeful single digits. The competition for the May 9 election is seen shaping up to be a duel between front-runner Moon Jae-in of the liberal Democratic Party and runner-up Ahn Cheol-soo of the center-left People's Party.