SEOUL, April 19 (Yonhap) -- An appeals court on Wednesday upheld a 16-month prison term handed down to a local professor on charges of bribery for manipulating a report in favor of Oxy Reckitt Benckiser in a high-profile toxic humidifier disinfectant case.

The Seoul High Court convicted the professor at Hoseo University in Asan, some 100 kilometers south of Seoul, of writing the report in return for money between October 2011 and September 2012.

The professor, identified only by his last name Yoo, was ordered to forfeit 24 million won (US$21,200) he illegally obtained from the household goods maker.

The humidifier disinfectant case, one of the worst scandals ever involving a consumer product using chemicals, came to light after four pregnant women died of lung problems from unknown causes in 2011.

Yoo was also convicted of fraud for illegally pocketing research fees worth some 68 million won from the university by fabricating the payroll. 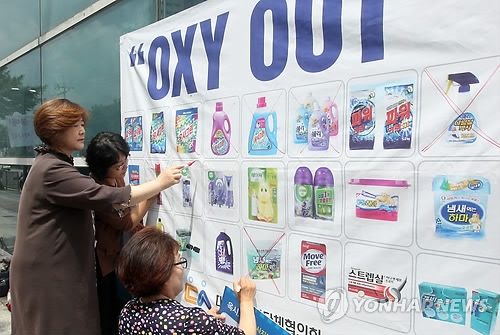