Japan's consul general in Busan, Yasuhiro Morimoto held talks with Park Sam-seok, chief of the municipality, earlier in the day as he offered to pay a courtesy call. Morimoto returned along with Japanese Ambassador to South Korea Yasumasa Nagamine on April 4 after the two were recalled to Japan in January over the statue erected by a citizens' group in front of the consulate.

During the talks at Park's office, Morimoto was quoted as saying by the officials, "In Japan, there is negative sentiment toward the statue in front of the consulate," expressing uneasy feelings toward it. 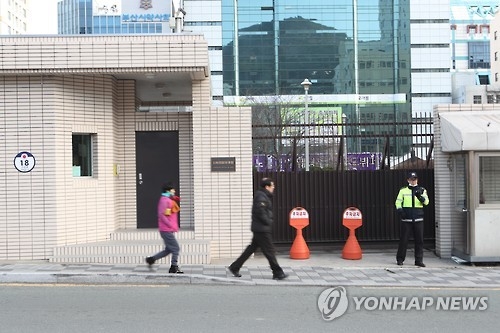 According to the officials, Park said the issue should be resolved through dialogue with the Japanese government after South Korea's next administration comes to office and the Dong municipality has nothing to do with it any longer. Park, who met with Morimoto in December when the statue was installed, also reiterated his position that the statue would not be removed during his term of office, the officials said.

South Korea is set to hold a presidential election on May 9 following the impeachment and ousting of President Park Geun-hye over a corruption and abuse-of-power scandal.

Tokyo has claimed that a statue commemorating the victims before its consulate in Busan, along with another standing in front of its embassy in Seoul, runs counter to a Seoul-Tokyo deal in 2015 to resolve the long-running rift over Japan's wartime sexual enslavement of Korean women.

Critics in Seoul demand the cancellation of the accord, saying that the Japanese government still refuses to recognize its legal responsibility and denies the women were forcefully recruited to front-line military brothels. The deal was reached also without consultation with the victims, they said.

Historians estimate that up to 200,000 women, mostly from Korea, were forced to work in front-line brothels for Japanese troops during World War II. Around 40 South Korean victims are still alive and mostly in their late 80s.