SEOUL, April 19 (Yonhap) -- South Korea, the United States and Japan united on Wednesday in urging China to stop economic retaliation on Seoul in connection with the deployment of an advanced U.S. missile defense system here.

Senior defense officials from the three countries made the call at the Defense Trilateral Talks (DTT) in Tokyo, which focused on their joint response to North Korea's nuclear and missile programs.

In a joint press statement, they pointed the finger apparently at Beijing for its thinly veiled economic sanctions on Seoul, although they did not mention it by name.

China has reacted angrily, putting pressure on the local affiliates of Lotte Group, which has provided a golf course in the southeastern area of Seongju for the THAAD site.

There have been a series of reports that China's authorities have curbed South Korea's cultural products and discouraged its nationals from traveling to the nation.

South Korea, the U.S. and Japan described such measures as "irrational and inappropriate."

They stressed that the move to bring a THAAD unit to the peninsula is a defensive measure to counter the North's nuclear and missile threats.

The regional powers also called on all parties concerned to play an active role for a resolution to the "fundamental problem" that has led to the allies' decision to deploy the missile shield here, according to the statement. 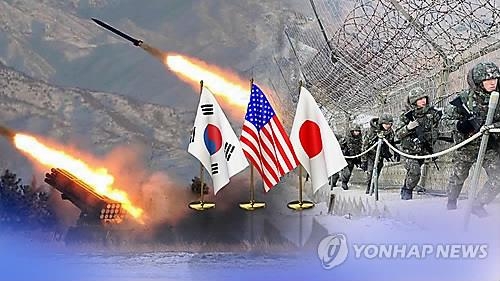 They agreed to bolster cooperation with the international community for the thorough implementation of the U.N. Security Council resolutions on the North for its past nuclear and long-range ballistic missile tests.

They urged Pyongyang to refrain from taking additional provocative acts and give up its weapons of mass destruction development in a "complete and irreversible" manner.

"The three countries agreed to strengthen deterrence against North Korea and emphasized the importance of close cooperation among their defense authorities for an effective response in case of a contingency," they said in the statement, vowing to constantly boost "interoperability" among the three parties.

In the DTT, the ninth session of the forum launched in 2008, South Korea was represented by Wee Seung-ho, deputy minister for policy. His American and Japanese counterparts were David F. Helvey, assistant secretary of defense for Asian and Pacific security affairs, and Satoshi Maeda, director general for defense policy.