SEOUL, April 19 (Yonhap) -- The new chief assistant coach for the South Korean men's national football team said Wednesday he wants to be a "bridge" between players and their beleaguered boss Uli Stielike, adding communication will be a key to success.

Jung Hae-sung was appointed by the Korea Football Association (KFA) on Tuesday as the top assistant to Stielike. He'll work with the Taeguk Warriors until the 2018 FIFA World Cup in Russia, should South Korea qualify for football's showpiece event.

Jung, 59, will be tasked with helping Stielike right the wobbly ship, in danger of sinking even deeper, on the heels of utterly uninspiring performances in the Asian World Cup qualifying stage.

Speaking to reporters at Seoul World Cup Stadium, Jung said he thought "long and hard" about the KFA's job offer, and his sense of responsibility ultimately made the difference. 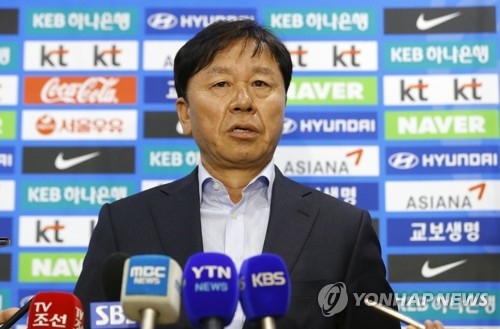 "I was determined to do whatever I could to help South Korean football," he said. "I will need some time to get to know Coach Stielike. I'll spend as much time with him as I can until the national team is assembled (for the next World Cup qualifier in June)."

Stielike has come under fire after South Korea dropped to China 1-0 on the road and eked out a 1-0 win over Syria at home in the final Asian World Cup qualifying round.

South Korea are clinging to second place among six nations in Group A with 13 points from four wins, one draw and two losses, four points behind Iran and just one ahead of Uzbekistan. Only the top two nations will earn automatic World Cup berths, and the third-place team must go through the playoffs. South Korea have made the past eight World Cup finals.

Critics have called for Stielike's resignation, but the KFA decided to stick with him and offered instead to bolster his coaching staff with an experienced tactician.

Jung and Steilike met for the first time Tuesday afternoon. Jung said they mostly talked about improving the players' conditioning for the three remaining World Cup qualifiers, and he came away with the impression that he and Stielike could do something great together.

"I have to be the bridge between the players and the head coach, and I have to do whatever the bench boss asks me to do," Jung added. "Also, my role is to allow the players to train with a sense of responsibility and duty. I am much older than they are, but I'll try to lead by example and show them what it means to represent the country."

Jung insisted it's important for the players to wear the national flag with pride.

"No one player is greater than the team," he added. "I'll teach them the importance of team, and of the flag on the uniform. A national team player must behave and compete on and off the field accordingly."