YEONGJONGDO, South Korea, April 20 (Yonhap) -- South Korea's first casino and hotel complex was unveiled at a grand opening outside of Seoul on Thursday, as the country is struggling to cope with a dearth of Chinese visitors in the wake of a diplomatic row with its neighbor.

Paradise City marked its official opening in Yeongjongdo, west of the capital, as the biggest casino resort in the country, vowing to draw hundreds of thousands of visitors annually from around the world, especially the neighboring China and Southeast Asia.

"Paradise City has been the best challenge for our company as the first mover of the tourism industry. We'll make sure the resort complex becomes a key destination of 'hallyu' for everyone in the world to enjoy, which we hope will serve to upgrade the national pride in the end," Paradise Group Chairman Jeon Phillip said at a media briefing. Hallyu refers to the spread of Korean pop culture across the world.

The construction of the mega-scale casino resort, worth 1.3 trillion won (US$1.14 billion) kicked off in late 2011, after a joint venture set up by Paradise and Sega Sammy Holdings Inc., a Japanese slot machine maker, won the bid to carry out the project.

Built on 300,000 square meters of land facing the Yellow Sea, the resort complex encompasses a foreigner-only casino, two hotels, a shopping plaza and other amenities designed by renowned experts here and abroad to cater to the tastes of both locals and overseas visitors, the company said.

The resort complex touts its proximity to Incheon International Airport, the country's main gateway, as one of its key advantages. It is just 15 minutes walking distance from the airport, while South Korea's capital is about 40 minutes away by Airport Railroad. 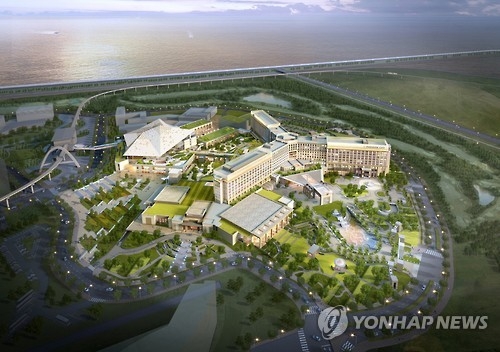 Paradise said the geographical advantage will help spur demand from neighboring countries, including China, Hong Kong, Taiwan and Japan, as well as those of Southeast Asia who are on the lookout for an alternative destination to Macau, Asia's gambling hub.

Despite such confidence, market observers here raise the specter of a lukewarm reception of the casino business as South Korea is witnessing a rapid decline of Chinese tourists after Beijing put a ban on selling group trips in apparent retaliation for Seoul's decision to deploy a U.S. anti-missile system on its soil.

Since the trip ban was imposed on March 15, the tally of inbound Chinese visitors has tumbled more than 60 percent on-year as of early April, according to the latest data by the state tourism agency.

Should this pace continue, the country may lose as many as half of all Chinese visitors with numbers dipping to around 4 million in 2017. In March alone, the Chinese tally dropped nearly 40 percent from a year ago.

Although jitters over shrinking Chinese demand remain, Paradise said it is expecting some 1.5 million to visit the casino resort this year alone, with annual revenue estimated at 880 billion won, up 27 percent from last year's 694.8 billion won.

The Thursday opening of Paradise City was for the casino, hotel & resort and convention center, with the remaining facilities, including the shopping plaza, boutique hotel, spa and family entertainment facilities, scheduled to start receiving guests in the first half of next year. 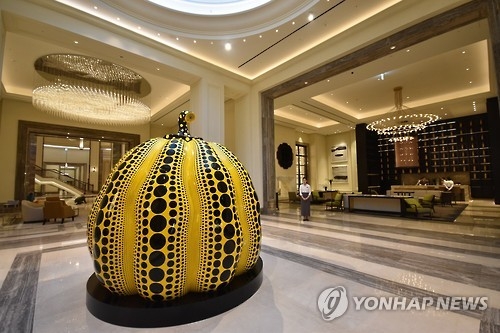