Pence made the remark in an interview with CNN aboard the USS Ronald Reagan at the Yokosuka Naval Base in Japan, saying the focus is now increasing pressure on the North.

"The policy of President Trump is to marshal the support of our allies in the region -- Japan, South Korea, nations around the world, and China," he said.

Asked if he envisioned direct negotiation between North Korea and the U.S., Pence said, "Not at this time."

"There's no question North Korea represents the most dangerous and most immediate threat in the Asia-Pacific and President Trump is determined to confront that threat by marshaling unprecedented cooperation with allies in the region and China and the world," Pence said, according to CNN.

"That kind of economic and diplomatic pressure will result we hope in the regime in Pyongyang forfeiting their ambitions, forfeiting their nuclear weapons program and joining the family of nations," he said. 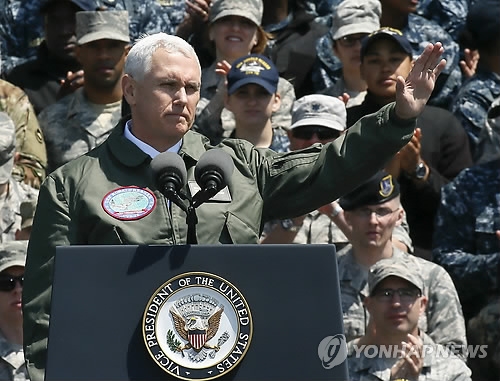 Pence: No negotiation with N. Korea 'at this time'

Pence: No negotiation with N. Korea 'at this time'