WASHINGTON, April 19 (Yonhap) -- U.S. President Donald Trump was making the point he's ready to defend allies from North Korea when he said he's sent a Navy strike group to the region, Vice President Mike Pence said Wednesday, following revelations the ships were actually heading in the opposite direction at the time. 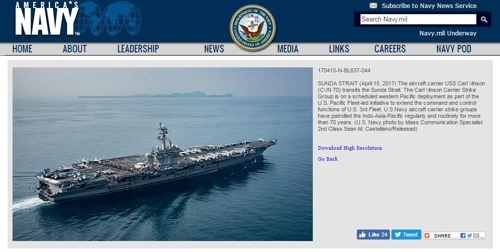 The U.S. Pacific Command announced earlier this month that the strike group led by the aircraft carrier USS Carl Vinson was redirected to the Western Pacific from previously planned port visits to Australia. National Security Advisor H.R. McMaster said it was a "prudent" decision to send the ships to waters off the Korean Peninsula to deter the North.

That led everybody to believe that the group would be heading directly to Korea from Singapore and could have been on standby in waters near Korea around Saturday last week when Pyongyang could conduct a nuclear test to mark the birthday of national founder Kim Il-sung, grandfather of current leader Kim Jong-un.

But recent Navy photos have shown that the strike group was nowhere near Korea at the time. It was actually about 3,500 miles away from Korea on Saturday and heading in the opposite direction to participate in joint exercises with Australia. The revelations drew sharp criticism that officials released misleading information.

On Wednesday, Pence said Trump was not intentionally misleading.

"The point the President was making is that we're ready. We're ready to defend our allies in this region. We want to send an unambiguous message especially to North Korea that any attempt to use weapons of any kind against our allies in this region or American forces abroad will be defeated and will be met with overwhelming force," Pence said in an interview with CNN.

A senior administration official was also quoted as telling CNN that it was because of a miscommunication.

The incorrect information on the aircraft carrier's immediate dispatch to waters off the Korean Peninsula has further driven up the already high tensions, even raising speculation the U.S. may be contemplating a preemptive strike against the communist nation.