WASHINGTON, April 19 (Yonhap) -- A ranking U.S. senator said the U.S. should launch a preemptive strike on North Korea if that's what it takes to stop Pyongyang from building a missile capable of hitting America, even though such military action would mean war.

Sen. Lindsey Graham (R-SC) made the argument during an interview with NBC News, saying that war would be bad for South Korea, Japan and other countries in the region, but won't reach the U.S., while an intercontinental ballistic missile could do.

Asked if he would support a preemptive strike on the North, Graham said, "If that's what it would take."

Graham also said the U.S. is "on a collision course" with the North.

The senator said North Korea was a topic when he had lunch with President Donald Trump.

"I said, 'Do you want on your resume that during your presidency the North Koreans developed a missile that could hit the American homeland with a nuclear weapon on top of it?' And he said, 'Absolutely not,'" Graham said.

Graham said he recommended Trump tell China that if Beijing doesn't stop Pyongyang from building a missile capable of striking America, the U.S. "will do everything, including diplomatic sanctions and military strike to stop the missile program."

"Look at it this way. Do you really want North Korea to have a missile that can hit California with a nuclear weapon on top of it. Twenty years ago, North Korea really didn't have any nuclear weapons. Every Republican and every Democrat has screwed up North Korea. They're close to getting a missile to hit the homeland. Now is the time to stop," he said. 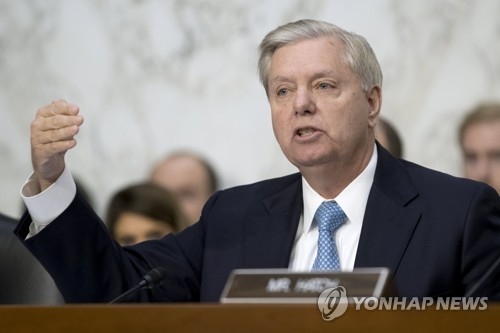 U.S. senator calls for preemptive strike on N.K. even if it means war

U.S. senator calls for preemptive strike on N.K. even if it means war