WASHINGTON, April 19 (Yonhap) -- The White House praised China on Wednesday for making efforts to rein in North Korea after Beijing's Foreign Ministry warned the North not to make provocative remarks.

"I think it's encouraging to see China continue to move forward and join us in this effort to control North Korea," White House press secretary Sean Spicer said at a regular briefing. "I think that the relationship that the president started building with President Xi down in Mar-a-Lago is clearly showing some positive signs."

"China continues to have both economic and political influence" over North Korea, Spicer said. "I think it's important to see them heading in this direction. I think it's a very positive sign to see them play a larger and larger role. I think it is in everybody's interest to contain North Korea's actions." 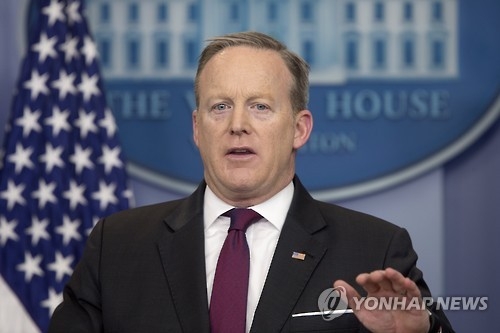 U.S. President Donald Trump held his first summit talks with Chinese President Xi Jinping earlier this month with a focus on North Korea. He has since praised China for trying to increase pressure on Pyongyang. Trump has also decided against labeling Beijing a currency manipulator, saying it could jeopardize efforts to solve the North Korea problem.

Trump has long said North Korea is China's problem to fix, urging Beijing to use its leverage as the main provider of food and energy for the impoverished North to bring the recalcitrant regime under control.

China has long been reluctant to use its leverage for fear that pushing the regime too hard could result in instability in the North and even its collapse, which could lead to the emergence of a pro-U.S. nation on its border.